Ubagarampillai Sagayam IAS Motivational Story – An IAS Officer in Tamil Nadu was in the news today for all the right reasons. You might have missed it since it was not on the first page of any news outlet. Ubagarampillai Sagayam was transferred twice in 48 hours, for taking on a state minister Textile Minister S Gokul Indira.

Presently, he is the Managing Director of Co-optex in Tamil Nadu. The trouble started when a Co-optex showroom at Kallakurichi was assaulted, by workers of the ruling party and Mr Sagayam lodged a police complaint against them much to the chagrin of the Minister. 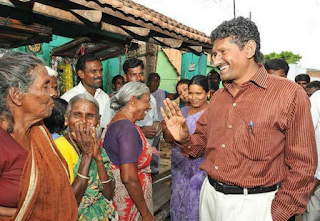 For Mr Sagayam the transfer is another day at the office. He has seen this already 24 times so far and more will come in the future. He is nightmare for power hungry, corrupt politicians.

Ubagarampillai Sagayam is an Indian Administrative Service officer who was born in the year 1962. He is also the first Administrative officer in the state to publicize his possessions.

As the youngest son of a farmer, he attended elementary school and later acquired an undergraduate degree where he pursued the Social Work course. After his undergraduate, he attained a post graduate and then attended college to pursue law.

HIS MOTHER, HIS INSPIRATION

Mr Sagayam says his mother was his inspiration and always told them to be honest and live with integrity. He recollects an incident,
when Sagayam was a young he bought home a mango stolen from a someone grove. When he told his mother she said “You should return in back” and when Sakayam said all of my friends also did it. She said “Even if everyone does it, a wrong does not become right, go return it”. What a great Mother!

Sagayam has a mantra that he holds high up to this day: “Reject bribe and hold your head high”. It is a policy that saw him transferred for twenty one times in twenty years, a record that no other IAS has held. It is also a policy that guides him in any post he is transferred to.

He performed voter awareness crusades in campuses in 2011 after he found out about Durai’s illegal quarry business, which brought about a huge loss to the government.

Durai was the son of an affluent Cabinet Minister and grandson of Karunanidhi the then Chief Minister. The campaigns happened during the 2011 assembly elections.

He wrote a report to the government informing them of the illegal granite quarrying in Madurai and how the government lost several crores as a result. He had found out all this in his long inspection tour around the Melur and Kilayur villages, during his term as the district collector of Madurai.

While in his tour, he spoke to several workers who established and proved to him that illegal quarrying was happening amid legitimate mining. It was also evident that some companies were thieving granite that came from neighbouring sites.

During his term as a revenue officer in Kancheepuram district, he took up a big responsibility and sealed the bottling plant belonging to a Pepsi multinational company. This was after a customer protested and showed him a soft drink bottle that had floating dirt.

Another achievement was conducting bribe-free and honest elections during his term as a Madurai collector. For this reason, he was later awarded an appreciation certificate by the chief election administrator, S.Y. Quraishi.

His biggest achievement is his promotion to the position of a managing director of the Tamil Nadu Handlom Co-operative. He apparently took all the Co-optex workers to an 90 year old handloom weaver’s house and showed them the utter poverty they live in. He reminded the Co-optex workers why they were paid – To take care of these weavers.

Amid all his achievements, he has had challenges too. His career seemed to be a foundation for strong and might enemies. This is because he exposed many secrets that big companies harboured in their midst.

In the year 2004, Sagayam had gotten himself in trouble again. During this period, he confiscated about 5,000 subsidized gas cylinders in 3 days that were illegally being used by restaurants. As a civil supplies deputy commissioner, he said that this resulted to the exchequer loss.

When illegal alcohol was taking away lives and livelihood of villages around Chegalpattu Mr Sagayam and village youth fought against a nexus of corrupt Government officials, politicians, police to eradicate alcohol.

Though his rectitude is greatly admired, this man Sagayam, is an iconic IAS cadre who triumphs in being truthful. He is also a passionate officer in his field. This is a praise accorded to him by a fellow IAS executive who has worked with him for many years, about 15. He also added that Sagayam’s propensity to stick his neck out made him shift from post to post. Mr Sagayam, 52, has reportedly been transferred 24 times in 23 years.

All the career-jumping must have surely caused unrest in Sagayam’s marriage. However, his wife displays otherwise. According to her, it has never been a challenge.

She also displays a soft-spoken simplicity when recounting the details of his husband’s shifts. Her worst hit, she says, was in the year 1999 when her husband was abruptly transferred from his usual collector’s post at Namakkal.

She says that she and their kids had to vacate the residence in one day and shift to Chennai. Besides the difficulties, he also portrayed his strength when he built many houses for 40 transgenders and above.

Sagayam has faced many difficulties in life. However, he still has the courage to go on and fight dishonesty among government officials. He also says that he is ready to turn his exploratory zeal to getting possible infractions of law inside the Handloom business. Nevertheless, innocuous the project or posting, there leaves a lot to be done to better it.

This is a remark he says when addressing people in his government and the public. Sagayam IAS is the real Singham and many movie scripts can be written with his stories as inspiration.